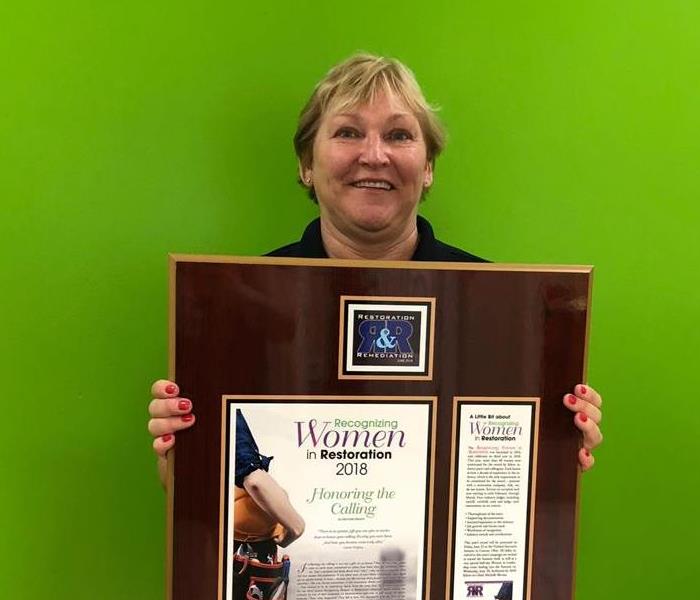 Diane with her award!

The Recognizing Women in Restoration was launched in 2016, and celebrates its third year in 2018. This year, more than 40 women were nominated for the award by fellow industry peers and colleagues. Each boasts at least a decade of experience in the industry, which is the only requirement to be considered for the award – position with a restoration company, title, etc. do not matter. Entries are accepted each year starting in early February, through March. Four industry judges, including myself, carefully read and judge each nomination on six criteria:

This year’s award will be presented on Friday, June 22 at the Violand Executive Summit in Canton, Ohio. All ladies involved in this year’s campaign are invited to attend the Summit itself, as well as a very special half-day Women in Leadership event leading into the Summit on Wednesday, June 20, facilitated by R&R Editor-in-Chief, Michelle Blevins.

Diane’s journey in the restoration industry began in 1986 when, as she puts it, she “married into it.” For many years, she acted as bookkeeper and helped her husband with administrative tasks. This allowed her to follow the calling on her life in those years - to be very present in raising their three children, until the unexpected happened several years ago, and her calling shifted.

“When my husband passed away from cancer a few years ago, I had some choices to make,” Diane explained.  “While some colleagues may have been surprised that I decided to maintain and operate the business, they soon realized I intended to grow the business as well.  My daughter, her husband and my son pitched in to help me and I am pleased to say that I have not looked back. I took the basic knowledge I had and built on that by getting all the training I could find.”

As a strong and fruitful leader, Diana has carefully surrounded herself with a very strong team of managers who have years of experience in their fields. She calls them one of the keys to her success.

Here is her advice to fellow ladies in restoration:

“Learn what you can about the industry, watch for new trends in restoration.  Invest in equipment, infrastructure and education. Most importantly, empower your employees and support your community.”